You are here: Home > Gold Deliveries Decline, Will Zim Achieve Its 40 Tonne Target By Year-End? 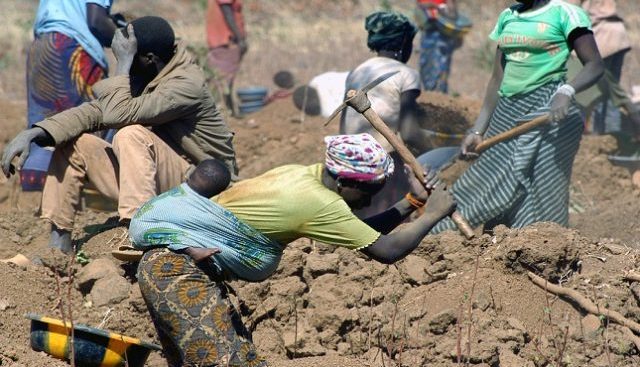 Zimbabwe is this year targeting a 28 percent increase in mineral export earnings as the mining sector gears towards the Vision 2030 target of an annual haul of US$12 billion per annum by 2023.

Last year the country raked in US$3,2 billion from mineral exports and this year Government has set the target at US$4,2 billion.

Gold is expected to play a key role towards the attainment of this year’s target as Government has projected deliveries to state gold buying entity, Fidelity Printers and Refiners at 40 tonnes up from 33,2 tonnes delivered last year.

Now the question is, will the government achieve its 2019 target given that total amount of gold delivered to Fidelity Printers, declined from 2 323 kilogrammes in May 2019 to 1 658 in June.

According to FPR, small-scale miners delivered less gold than large-scale producers in June.

Gold mining is the largest in the mineral extractive sector contributing 40% of output in Zimbabwe,18 % of revenue going to the government. The sub sector employs more than 12 000 people in large companies and 500 000 artisanal miners.

Gold delivered in January was 1 926 kgs worth US$79 million, while 2 274 kgs of gold worth US$96 million was delivered in February.

Gold delivered in May was 2 323 kgs worth US$95 million before the massive drop in June when only 1 658 kgs were delivered worth US$65 million.

An economic expert who preferred anonymity revealed that both large scale and small scale miners are not delivering their full production of gold to Fidelity due to lack of trust and poor prices hence miners are now resorting to selling their gold through informal channels.

“The RTGS to USD value being offered by the Reserve Bank of Zimbabwe is too low thereby in actual sense decreasing the value of gold in the hands of miners. This is now forcing miners to abandon formal channels of exporting their productions to informal channels that are reportedly paying a reasonable price,” said the expert.

He further said that ” Naturally, we would have expected the quantity of gold delivered to be around the halfway mark for the target by now, which is 20 tonnes but the figure is way below that, which makes the target very difficult to achieve.”

“The fact that monetary authorities have reduced forex retention to 55 percent, gold miners don’t have appetite to sell their gold to Fidelity Printers and Refiners as they are better offers somewhere. The trick is that they should have raised forex retention to above 80 percent to woo miners,” said Chinyenze.

According to the Zimbabwe Miners Federation, the Government acknowledges that the Artisanal and Small scale Mining sector has for long been disenfranchised due to the stigmatization of their operations hence there is a need to align them in the mainstream economy for the country to achieve its target.

Meanwhile, the Zimbabwe Miners Federation (ZMF) said they have designed several measures to ensure that the country meets the projected gold output.

” Part of the measures includes the resuscitation of The Reserve Bank of Zimbabwe Gold Service Centres, setting up of The Gold Mobilization and Gold Coordinating Committees between ZMF and FPR, increasing access to long term ﬁnancing and mechanization of the ASM sector,” said ZMF Chief Executive Wellington Takavarasha.

ZMF and FPR have also designed an identiﬁcation card that will assist the formalization exercise as artisanal miners can sell their gold at FPR mobile gold buying units and Centres, FPR gold buying agents and ZMF Gold Buying Centres using the card.

Other measures include partnerships between ZMF and financiers and investors to boost ASM extractive and processing operations.